One cool effect that you create with any type of sustained note or chord progression, is to break it up into a rhythmic pattern, similar to the ‘pad sound’ on the Timbaland produced track ‘my love’.

4 Ways to Add Rhythmic Effects to your Pads

There are different ways you can add rhythmic effects to your strings or pads.

This type of effect sounds really good when you have a nice chord progression, and you break it up into a rhythm.

I’ll go over 4 different ways to do this:

One way to break up a pad or strings into a rhythmic pattern is by side-chaining a gate to a kick, snare, or percussion track to add some rhythmic movement. A gate will cut the volume in time with the kick or percussion.

Side-chaining can also be done with a compressor to create a ‘pumping effect’ on the pad, which also sounds good.

Here’s how you can sidechain a gate to your pad:

To sidechain a gate to your pad, you need to create 2 tracks.

A drum track and your pad track.

Next, route the output of the drum or percussion track, to a bus that will be used to trigger the side-chain on your gate on the pad track. 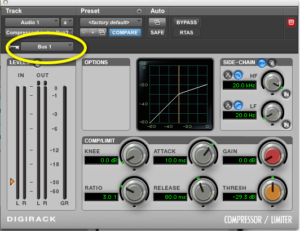 Change the key input on your gate (or compressor) to the bus that is on the output of your drum track. 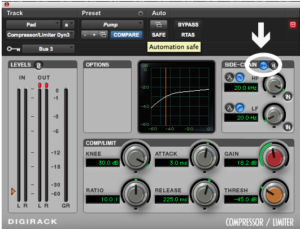 Then, click the key input button on the gate or compressor.

Now the gate or compressor will be triggered by key input, which is the bussed audio from the drum track.

I’m doing this in pro tools, but its pretty much the same concept with any other DAW.

2. Using a Rhythmic Filter to Break Up a Pad 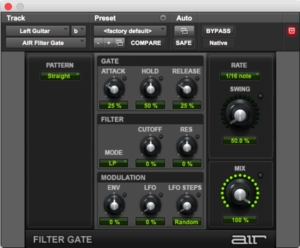 Another way you can break up a pad, is with a rhythmic filter.

There is a stock plugin in protools which has some nice rhythmic filter effects as presets called AIR Filter Gate.

Air Filter gate allows you to change the pattern, rate of the notes, and other aspects of how the filter is triggered. Filter Gate is one of my favorite plugins.

3. Chopping up an Audio file in a Rhythmic pattern

One more way you can add rhythmic effects on a pad, is by chopping up the wave form into a pattern.

This is probably the easiest method. Just delete sections of the waveform in a pattern, to create a nice effect on a sustained note.

4. Using Plugin Automation to Draw Effects in a Rhythmic Pattern

Another way you can chop up a pad into a rhythmic pattern, is by drawing in plugin automation.

You can use any plugin this way by automating the master bypass.

Just pull an effect in and out of a track by turning its master bypass on and off with plugin automation.

What can you trigger with a key input?

Key inputs are not found on every plugin, but ones they are usually found on are gates, compressors, de-essers, filters, lfos, and eqs.

In addition to effects, you can use a key input to trigger an LFO or Envelope and use that to modulate the pitch, volume, effects, etc of a sound.

If you have any other ways you like to use key inputs, let me know @puzzlevortex